I was recently creating a project hand-over process for a PMO and after performing the required PMO activities, the project was to be handed over to the Project Manager for execution.  The process comprised a list of activities that Project Managers have to perform to accept the project from the PMO so that he/she can continue with its execution.  These activities involve the Project Owner and Status Manager fields in the project record.  I thought this was a great idea to share as I haven’t seen much about the use/advantages of Status Manager and Project Owner fields in the project record.  There has also been an increase in the number of organizations establishing PMOs for better project management, and that requires users to better understand the role of the Status Manager and Project Owner.

After receiving the Project Schedule along with any other required documents such as the Project Charter, the PMO could do the following:

Once they have received notification from the PMO that the project has been saved on the server, the following activities should be performed by the Project Manager to make sure that he/she won’t miss any task updates from the resources. 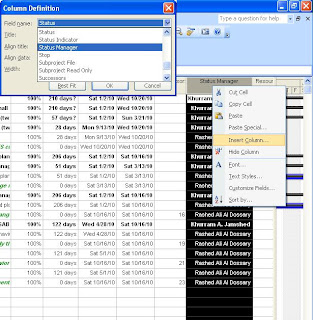 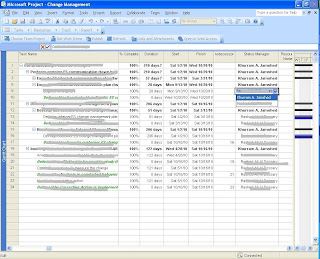 There are few interesting points you will observe when you insert the Status manager field in the project.  The field drop down will list all the previous status managers of the project in addition to your name.  When they open the project, any of your project users (with the open/save/publish-project-to-the-server permission) can set themselves as the Status Manager of the activities that belong to them.  This is one of the awesome advantages of the Status Manager – at least I rate it as awesome – and always highlight this to users.  It allows more than one approver in the same project plan. This is particularly useful for large projects where more than one Project Manager is involved, and where each is responsible for their set of activities within the project.

As usual your comments, feedback are widely welcome.

Blog Posted In: How to, Project Client